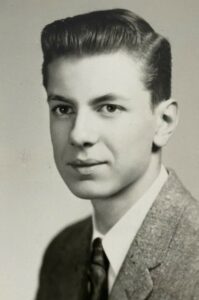 Ronald Dennis Lenaker, 81, of Rapid River passed away peacefully at home surrounded by family and his loving dogs on Saturday, January 21, 2023.
Ronald was born on December 7, 1941 in Chicago, IL the son of Gilbert and Meta (Anderson) Lenaker. He graduated from York Community High School in 1959 in Elmhurst, IL. He was united in marriage to Sylvia Lindahl on October 8, 1966 in Elmhurst. Ronald worked for Johnson Electric Coil Company for 51 years. He was the Vice President of Engineering and served on the Board of Directors. When the company moved its business operations to Antigo, WI in 1979, Ronald and his family moved along with them. Ronald eventually retired and moved to the Graal Shores area of Rapid River where he enjoyed hunting, fishing, reading, time on the lake, spending time with family and anything to do with cars and trains.
Ronald is survived by his sons, Steve (Angela) of Rapid River, Mark (ex-wife Suzanne) Lakeville, MN, Paul (Mary) of Milwaukee, WI and Peter (Jackie) of Madison, WI; grandchildren, Benjamin (fiance’ Quenna), Maxwell (girlfriend Gabby), Alexa, Barrett, Jude, Miles, Willa, Silas, Beatrice and Juniper and his beloved dogs, Jax, Sydney and Thor.
Services celebrating Ronald’s life will be held at a later date.

All so sorry for your loss. Ron was soft spoken and kind as all of you know. We enjoyed Sylvia and Ron at hockey.

We are so sorry to hear of Ron’s death. Ron & Sylvia were two of the first people we met when moving to Antigo in 1984. It’s because of the Lenaker family that our sons Mark & Jon are Bears fans to this day! Sylvia was our daughter Ruth’s godmother. We attended couple’s Bible Study with Ron & Sylvia (Sugar) for many years and it was a privilege to watch all of you grow up! We ran into Paul & Mary at Bay Beach this summer when we were there with grandkids (daughter Rachel’s kids). Please know you all are in our prayers. May the Lord be your strength, comfort, hope and peace during this difficult time.
Love from all the Stoehr family

Don &Emma Knicker send our most sincere condolences we have nice memories of all of U when we live in Antigo and Ron and Don work at Jhonson’s.