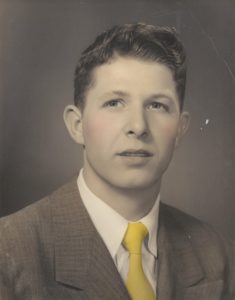 Loyst was born on July 9th, 1932 in Munising, MI, the son of Charles E. and Greta R. (Masters) Trombley. He was raised in Munising (Cox addition) and attended the Washington & Mather High School. Upon graduation, Loyst entered the US Army and was stationed in Augsburg, Germany for 28 months. While there, he was a member of the Division Honor Guard, sang with the Division Choir, was a Liaison Chief and Supply Sargent. Upon his discharge in 1956, he went to work for Kimberly Clark.

He attended Northern Michigan University and went into sales. He worked for Prudential Insurance Company as an agent & sales manager for nearly 25 years. Loyst & his wife, Nancy, purchased the Pine Haven Rest Home and ran it together for 18 years, selling it in 1992.

While he was with Prudential, they lived in Marquette, MI, Watertown, WI, and finally settled in Rapid River, MI in 1967 where they raised their 3 children, Tarri, Greg & Trudy.

While in Rapid River, Loyst was an active member of the community. He brought in Little League to Rapid River & coached that, along with Senior League and Legion Baseball. He served 5 years on the School Board (4 as President), was a member of the American Legion Post 301, former member of Gladstone Yacht Club, Gladstone Golf Club and the Irish Oaks Golf Club.

He was a charter member of the Rapid River Lions Club where he served as Past President and all other officer positions, as well as the Board of Directors for 14 years. During his time, he was instrumental in securing the Masonville Twp Park property. He was elected District Governor of Lions 10B and was a Council Chairman. He received the 100% District Governor’s Award, the International Presidents Award with 2 Wings and was the first Lion in the Upper Peninsula to receive the Melvin Jones Award.

Loyst was also Vice President of the Lions of MI Service Foundation when it chartered and also served as President. While chairing the Grant Committee, he secured several grants for Bay Cliff Health Camp. He served on the International Convention Committee, which he chaired for 15 years. He attended 17 conventions worldwide. He was the recipient of the Ralph M. Sheehan Award and was inducted to the MI Lions Hall of Fame in 2011.

Loyst enjoyed golfing, playing cards and was an avid Detroit Lions, Tigers & Pistons fan, attending many games with his son, Greg & friends. Loyst hunted and owned property at Camp 26, where he spent lots of time with family & friends. He later built a cottage on Dana Lake that became his seasonal home. Family dinners at Dana Lake made him smile from ear to ear. He & Patty spent their winter months in Mississippi & Florida.

In 2017, he was thrilled to be a part of the UP Honor flight, an experience he was happy to share with his daughter, Trudy. At age 86, Loyst went to work at Sage Run Golf Course for 2 years and very much enjoyed it. He lived an extremely active life, still golfing and having family dinners just a month before his passing. He and Patty were a busy couple who spent a lot of time with friends & family.

Family will receive friends and guests on Tuesday, June 9, 2020 from 2:00 to 6:00 PM at the Skradski Funeral Home in Gladstone. Mass of Christian Burial honoring Loyst is scheduled to follow visiting hours at 6:30pm at the All Saints Catholic Church in Gladstone with Rev. Fr. Jamie Ziminski officiating. Luncheon will follow at his granddaughter Brooke’s home in Rapid River. Loyst will be laid to rest in the Maple Grove Cemetery in Munising on Monday, June 15th where military rites will be presented. The Skradski Family Funeral Homes of Delta County are assisting the Trombley Family.

Trudy and family. Although I never had the opportunity to meet Loyst it appears that he accomplished many wonderful things. It is something to be very proud of as I am sure you know. My thoughts are with you at this difficult time. Remember he will always be with you.

When I heard of your passing I was and still am truly saddened…Dana Lake misses you and it hasn’t been the same around here since you sold your place. It was a joy to see your smiling face whenever you came over. Also, I’m sure you may know that your 4 wheeler is being well taken care of….Thanks for selling it to me and I know I bugged you about it for years…
The commitment to the communities where you had lived is truly honorable…
Miss you my friend
May you Rest In Peace
The Smiley Family

Dear Aunt Pat and Trombley,
I am so sorry Loyst passed away yesterday! He was a wonderful man, always kind to all and loving to his family and friends! He lived life to the fullest and made the best of all situations. We will miss him but know he is at peace with our Heavenly Father. RIP Loyst

Sorry to hear of his passing I always promised to have Tarri over to our house in Clermont Florida and will do so.prayers for your family.Nancy was my cousin. We have two children in Florida.Melinda and Dr. Joseph Shega.

Loyst and Patti were a wonderful teams. Loved playing golf with him. Loved his sister Millie.seeing them in Florida and yes an avid Lions fan like us. Thoughts and prayers to all of you.

Our heart felt sympathy for such a loss. However we know Loyst is with God.
Prayers to the family

So sorry to hear of Loyst’s passing, he will be truly missed, he is playing golf with Mike now…

Patty ,
Sending you my deepest sympathy.
You are in my thoughts and prayers.
Iris Maki

So very sorry to hear that Loyst passed away. Although I have only seen him through postings on social media lately, his kind & welcoming smile will be missed by all that knew him. What I didn’t know was the extent of caring he displayed, which is apparent by all the the helpful activities that filled his life. Remembering my cousin Loyst and that wonderful “smile” will always bring good memories to my mind.

Patty and family: our sincere sympathy to all of you. Loyst was always so kind and loving to my family, you were always part of our Depew family. Such good friends to my parents, Bev and Dave. Loyst would stop by the house even if just for a ten minute hello or to talk about the Lions with my Dad every time he took a ride into Munising. My parents loved those visits more than you know. I loved hearing all the stories about your trips together and the fun you all had together. My kids and I appreciate all the times Loyst and Patty visited us and Showed genuine interest in my kids lives. His kind heart will be missed. Big hug from Beverly and all of us, Patty! God Bless. Love Kathy, Jesse, Megan, and Jenna

Loyat & Patty have been very good friends of ours , close to 20 years or so!
Loyat & Patty made a wonderful couple, & were always a joy to golf and hang out with!
Loyat was always a loyal Lion fan such as his buddies, Jim D. & my husband Ken!
Loyst will be playing golf with DavidG. , Mike, & a few of the good old boys on Gods’ golf courses!!
He will be missed greatly!
“Lavigne” & Ken Haggart
Ps. So glad you two had your last Christmas dinner with us & the rest of our Florida Family!

We are so very sorry to hear of Loyst’s passing, he was such a wonderful, amazing man. Thank you for your wonderful memories in Florida Patty, we so enjoyed our times with you both.

“When someone we love becomes a memory,
Their memory becomes a treasure,
Always and forever in our hearts…”

May God’s peace fill your hearts in this time of sorrow.

Trudy and family, Sorry to hear of your dads passing. He was such a kind respectful boss at Pine Haven. He will be truly missed let the memories live on! RIP my friend.

To the family of PDG Lion Loyst ~

Sadly, I never had the pleasure of meeting Past District Governor Lion Loyst … but I wish I had. As a fellow Lion, I can say that I know his presence will be greatly missed by many. May your hearts be consoled by fond memories of him, and may it help to know that he leaves behind a legacy of wonderful accomplishments — he made our world a far better place thru his service, generosity, and leadership in Lions and beyond. Blessings to you all.

So sorry to hear of Uncle Loyst passing. I never knew how busy an uncle he was. He always saved time to come visit our family every time he was in Munising . He will be deeply missed by family and the community he lived in. Love you uncle Loyst. My sympathy’s to the family
D.A. Braatz Selak

I’m so very sorry to learn of Loyst’s passing. My heart is heavy for all. Prayers & virtual hugs. Steve & Kathleen (Masters) Sowa.

I am truly saddened by your loss of your father ,I thought he was a very decent man. I will pray for him and your family during this time that you find peace in your heart. God bless you all.

So sorry to here, Loyst was great man and friend always enjoyed talking to him. Sue and I condolences to all the family.

I just found out today of Loyst’s passing. I enjoyed working with him at Sage Run. He will be missed. Prayers.

So sorry to hear of Loyst’s passing. I was looking forward to seeing him and Patti at the Swallow Inn after our time back to the UP from Florida. He contributed so much to our local Rapid River Lions Club, district, state and international Lions. He was instrumental in helping so many people in his lifetime. We will all miss him and his winning smile! RIP LoystL

Going to miss you Tram. You were so good to my mom & dad – the whole family. Your kind soul was always welcome in our home and your kindness always appreciated. Loved listening to your stories. You lived life to the fullest & loved life. Bless you & your family. Enjoy your welcome into heaven!

Thanks to all for the kindness, prayers, support ,monetary gifts and generosity from many caring people . OSF Hospice Skradski Funeral Home for guidance and making it easier for us . Father Jamie of All Saints Church for comforting service . The American Legion color guard service at the grave side . If there is anyone else we have missed thank you you kindness will be never be forgotten. The Trombley family and Patty Demeuse .

We never realized the many lives that Loyst touched until we were showered with kindness, prayers, support, monetary gifts and generosity from many caring people as we celebrated his life.
We would like to express our appreciation to OSF Hospice for their help, support during his short time of illness. To Ed Walker and Staff at Skradski Funeral Home for guidance and making it easier for us. Father Jamie of All Saints for comforting service, and the American Legion color guard service at the grave side.
If there is anyone else we have missed Thank You your kindness will never be forgotten.
The Trombley Family and PattyDemeuse