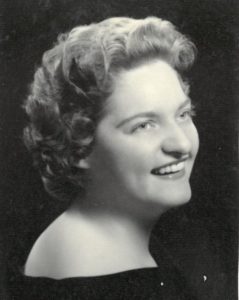 Lois June Berg, 81, of Gladstone, Michigan passed away peacefully at home on September 25, 2019, with her son, Alan at her side.

Lois was born June 15, 1938 in Escanaba, the daughter of Albert and Sadie (Strom) Mattson. She was raised in the Gladstone area and graduated from the Gladstone High School in 1956

On September 2, 1961, Lois was united in marriage to Harold George Berg at the Bethel Evangelical Free Church (currently New Horizons Free Methodist) in Gladstone. They had two sons and enjoyed 55 years together until Harold’s passing in 2017.

She was employed as office manager at a local insurance agency from high school on through retirement. Lois was a member of the Escanaba Ladies Elks and Women’s Auxiliary of the American Legion Post 71 in Gladstone.

Lois was not only a devoted wife, mother, grandmother and great grandmother, she was also very dedicated to her faith in God. She was a lifelong and active member of her church, where she served over 60 years as both organist and choir pianist-, most notably playing for their annual Christmas Cantata. Not only did she hava a great love of gospel hymns, she enjoyed traveling around the country and Europe, cooking, watching her daily soap operas and hosting many family and friends over the years. She was also an avid Green Bay Packer fan and “card sender”, never forgetting birthdays, anniversaries, or a special occasion.

Lois was a lovingly warm and compassionate person that always put the needs of others before her own. She will be forever remembered for the boundless hugs, generosity and love shared with those that were blessed to know her.

In addition to her parents, Albert and Sadie (Strom) Mattson, Lois was precede in death by her husband, Harold and son, Terry.

The family would like to extend their heartfelt gratitude for the exceptional home-health care provided by her aide, Laura, as well as local Hospice.

Funeral services for Lois will be held at a later date and will be announced by the Skradski Funeral Home in Gladstone.

Auntie Lois will be missed terribly by Gaylord and I, we have been so blessed to be able to care for her closely in the last year and blessed to have been able to help her with many of her household needs after the loss of Uncle Harold as well as assisting with the care of Uncle Harold as well. She was always there for us to talk about anything and everything and she was a wealth of information as well as we always were company for her several times a week. I think we all made a great team of care givers.. Alan, Laura, Gaylord and I always made sure she was comfortable and that all her needs were met. This will be a big loss for al of us.
We will cherish all the time we had with her and all the memories that we had to share. Aunt was a great lady and I can tell you one thing she never missed a Birthday up until the last couple months as her health failed terribly. She is with Uncle Harold and Terry now and at peace. Again Laura her wonderful care giver was very attentive to all her needs and we were only a phone call away and was able to assist her may times with the needs of Aunt.

We will miss you so much Auntie

Had the chance to pastor Lois and Harold at New Horizons Ministry in Gladstone from 2001-2002. Such a great couple! Lois’s talents on the organ were a great complement to our worship services. I have fond memories of that time, and send prayers out to the family upon hearing of Lois’s passing.

I was so sorry to read of Lois’s passing. She was a classmate of 1956 class. We played together at a young age whenever I went to
visit my grandmother on the “Buckeye Hill” location. She was quiet, loyal and a nice classmate. I called & wrote to her after her husband’s passing and it was good to connect again after many years. We both enjoyed it!. She spoke fondly of her family & life
she’d had, even though it was not an easy one. May she rest in peace and will be lovingly remembered by many who knew her.

So sorry to hear of Lois’s passing. I helped her out with whatever she needed when I was taking care of her son, Terry, (I worked for Great Northern) before his passing. She was a very nice lady and I always liked sitting and talking to her about everything and anything. I will miss her a lot.

Auntie Lois….you gave the best hugs ever and always doing your best to keep everyone upbeat. Kel loved Auntie Lois and of course it didn’t take me long to love her also. Rest in Peace and keep all of them up there in line…thanks and love you!

Our sincere sympathy to the family. We have known Lois for decades when she worked for Hupy Insurance. Lois grew up in the same Buckeye neighborhood where I was also raised. Then there was a twist of fate and surprise when I discovered that she worked as a night auditor where I had just got hired. It was during these many years of working together that our friendship blossomed. It saddens us to learn that she had passed. Our deepest sorrow and prayers. May God Bless. Love Pat & Les

Alan – Your mom was a special person. I have such fond memories of hanging out with you and your family when we were kids. Your mom always treated me like part of the family. I especially remember her taking us to Burger Chef to treat us to burgers and fries when we were little and all the camp weekends. She was kind and loving and always had a smile and a hug. She’s now reunited with your dad and Terry in heaven! Take care my friend.

I was blessed to be your caregiver and to get to know you and your great family. I am so grateful that I made your life a little easier and brighter!
You will be missed.
Love you and will watch family feud together again some day….

Dear Alan, Please accept my deepest sympathy on the loss of your mom. She was kind, loving, intelligent and humorous. She always made me feel like I was welcomed and loved. She was a good friend and I miss her daily. Take comfort in knowing she rests eternally in the presence of the Lord and is with your dad and Terry as well as her family. Heaven gained a wonderful angel with a beautiful voice who I’m sure is singing in the choir. My deepest sympathy and love. Kathy

I never once seen you without a smile. God bless your journey.

Lois was the first to accompany me when I sang at my first wedding. I was so scared my knees were knocking. She made me feel so at ease. Of course I knew her and all the family for years and loved them all dearly. Fly high lois until we meet again. You will be so missed by many.

Sad to hear of Cousin Lois passing. Wrapping Alan and all the extended Berg family in hugs and prayers

Alan- I’m very sorry for your loss. Reading the obituary and other comments here, I can tell your mom was the sweetest woman and made an impact on many lives around her. Please be strong during this time and may God bless you and the Berg family.

Alan,
I loved your mom. She was so sweet and thoughtful. Never forgot a birthday or Christmas. Cherished memories that you have will bring you comfort.
She will always be in your heart.
Love you,
Susan