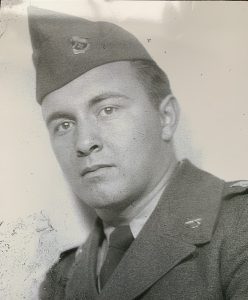 Lew was born March 23, 1937, in Escanaba, MI, the son of Carl and Genevieve (Laundra) Mosier. He graduated from Rapid River High School. Lew was united in marriage to Marland Pepin on August 20, 1955 at St. Thomas The Apostle Catholic Church in Escanaba. He then enlisted in the United States Army. He was a rank of SP3 from 1955 until 1958. He was stationed in Korea on the “DMZ Zone.” Lew was also a sharp shooter, a High Speed Radio Operator, and a member of the KMAG, Korean Military Advisory Group.

Following Lew’s Honorable Discharge, he spent 30 years working for the United Parcel Service. He drove 2.4 million miles without an accident for UPS. He was inducted into the “UPS Circle of Honor” honored by the Governor and the Senator.

Upon retirement, Lew and Marland enjoyed traveling around the United States in their motorhome for the next 17 years.

Lew was a member of St. Thomas the Apostle Catholic Church, a former member of AMVETS, and the National Rifle Association. He loved camping, snowmobiling, and enjoyed puzzles. He was particularly proud of going on the UP Honor Flight in 2016.

Family will receive friends Wednesday, January 8, 2020 from 10:00 AM until Noon at the Skradski Family Funeral Home in Escanaba. Military Honors will be presented at Noon by the Delta County Veteran Council. Mass of Christian burial will follow at 1:00 PM at St. Thomas the Apostle Catholic Church with Rev. Fr. Rick Courier officiating. A luncheon will follow in the church hall. Lew will be laid to rest in the Gardens of Rest Cemetery in Wells, MI. In lieu of flowers memorial contributions may be directed to the UP Honor Flight. The Skradski Family Funeral Homes of Delta County are assisting the Mosier family.

Marland, I was so sorry to hear about Lew. My thoughts and prayers are with you and your family.

Marland
We are so sorry for your loss. Please know our thoughts & prayers are with you and ypur family.

Dear Marland and family So sorry to hear of Lew’s passing.He was a sweet man.Im sure he was greeted at the gates by Carrie and Joey singing to him. Love Jimmy and Donna

Dear Marland family,
We send our deepest sympathy to all of you. You will be in our thoughts and prayers.
Sending lots of hugs!
Tracie and Terry Koepp

Sending our sympathies and big hugs! We will miss seeing the two of you and our little visits! Lou watched over all of you in this life; and we believe he watches over you still!
Linda and Dan Robitaille

Mar, So sorry to read about Lew passing. We will remember him with a smile . He was a wonderful person. We were blessed to have known him. Cindy & Terry McDonough

Dear Marland and family, we are so sorry for your loss. What s gentle soul he was and what an honor for us to have the privilege of knowing Lew. He will be greatly missed and dearly remembered by all who knew him. Our condolences and prayers are with you. Randy and Theresa Schroeder.

I am deeply sorry for your loss. I remember you both fondly as we we’re always at your home when I was little. You may remember me..Carmen (Pineau) Van Horn. My husband Bob and I send our deepest condolences to you and the family. Know God is by your side as you go through these difficult days. Lew was a wonderful man and remember he use to always make me laugh. Take care.

Marland, So sorry to hear of Lew passing, Lew was a dedicated UPS employee for me. Ruthann and I still talk about the week you and Lew showed us the ropes of Blioxi MS, back in 2002 after I retired. I still have Lew’s phone number stored in my cell phone,sorry I did not call a few more times. Jim Boutell

Troy , Kim and families, Thinking of you at this difficult time with sympathy, love and prayers

I had the privilege of working with Lew at UPS. He was a very good man. I am so sorry for your loss. I know he is up in Heaven now telling all of his jokes and entertaining every one. Rest in Peace my friend.

Dear Marland and family.
Sad to hear of Lew,s passing. Always a great guy with a great smile. Liked by everyone. Always had time to say hi. We will miss him and think of him often.

Marland and family of Lew,
Pete and I were hoping to attend Lew’s visitation. We were with you in prayer and spirit. We send our sympathy to you as our year 2020 begins. You have been through so much since we have known you with Carrie and Lew; however, you always have a smile and kind word. Know our sympathy goes out as well as all those friends you have made at the Rapid River bingo. Lew will be missed.

Marland and family, Just found out about Lew’s passing. Haven’t seen you all in a few years but always thinking about you. Had some good laughs when you camped at Curwood Park in L’Anse or at the Fair in Escanaba. Take care were thinking of you. Jennie and Tom Nordstrom