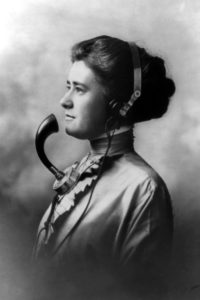 Laura Dorothea Louis, age 94 of Gladstone, peacefully left this world on Sunday November 10, 2019 after a very brief illness while her family were at her side.
She was born in Newport, Rhode Island. Newport was at one point the center of wealth in America. The Vanderbilt’s and Kennedy’s played or ignored each other in a delightful dance of old-moneyed reverie. Laura—neither Vanderbilt nor Kennedy—lived well away from their ocean cliff mansions.

After graduating from Newport High School, she became a telephone operator in the days when you dialed the operator first to connect you to the party to whom you wished to talk. She would say “operator” and then ask the calling party “number please.” Laura would then manually plug a patch wire at Newport’s AT&T’s central telephone office from the cable that ran from your residence to the cable that ran to the place/person you wanted to talk to saying “one moment please”. Of course, Laura used her innate wit and light-hearted comedic personality to embellish the personal experience for the calling and called party (an attribute highly valued by AT&T at the time).

Laura met and married her late husband Eugene “Gene” Henry Louis, a naval officer from Escanaba. He proposed to Laura while he was stationed in Key West, FL, and they were married in Newport. They enjoyed Naval assignments in Norfolk VA, San Diego CA, Newport RI, Boston MA, and the Great Lakes Training Center in Illinois. After moving around the U.S. from port to naval port, they finally settled in Gladstone in 1962 where they lived out their lives.

Through the years, Laura made a successful home in Gladstone nurturing her children. During those years, she joined Gladstone’s Home Extension Club in which she and the other women took on many projects like providing hobby and craft lessons to its members.

Laura interviewed with Escanaba, MI Shopko before it even opened and was hired as the Head of the Domestics Department. She retired from Shopko in 1989.

Laura often told stories of her East Coast home. Enwrapped in nostalgia, she often painted her stories so vividly that you thought you were there along the Ocean or with Family or back in “history.” She held a stolid reverence for a place she hadn’t lived in for decades. Here was a woman, transformed by place, constantly aware of her dual citizenship … glad to be with her family along the Little Bay de Noc coast, yet reminiscing about her family and life along that coast.

She was preceded in death by her mother Laura Rodda Brownell, her sister Norma Schweitzer, her sister Phyllis Brownell, her brother Norman, and her step-brother, George Toelken. She is survived by her cousin, Betty Chambers of Newport, RI.

Visitation will be on Wednesday, November 13 from 4:00 PM to 5:30 PM. Closing prayers will be at 5:30 PM. Laura will be laid to rest in the Fernwood Cemetery in Gladstone.

So sorry for your loss. I know she was suffering and that has ended. My thoughts and prayers are with you all. I wish I could be there with you. Hugs to you.

Laura, what a wonderful woman. Worked with her many years ago at Shopko, knew her most of my life, she was a spitfire. My condolences to the entire Louis family in the loss of the Family Matriarch. May she rest in peach and love. Prayers to all of you.

Laurene, What a beautiful synopsis of your Mom’s life. Peace, prayers and sympathy to your family. Patti and Mark Hager

Wayne, sorry for your loss. I wish I was in Gladstone for her celebration of life and what a wonderful and intersting life she had. Prayers to you & family.

We have fond memories of our friend and neighbor ,Laura. Her positive outlook and honesty drew people to her. Rest In Peace , Laura . You loved much and were loved abundantly in return. May God Bless the Louis family .

Gary and wayne; what a wonderful way to say good bye . She sounded like a wondeful Mother to grow up with. My prayers go out to you and your familys.

I recall the Louis family , our neighbors, when we moved to Gladstone on Minneapolis Avenue in 1969. Darren was the same age as our oldest daughter, Pam, so he played at our home occasionally. Laura Louis was very friendly checking on Darren. Pam is hoping he can make it to his Mom’s final tribute. If Darren wishes for her email, I can provide it. Won’t be at funeral to tell him personally.

I worked with Laura for five years at Shopko during the seventies. I so enjoyed her humor and her gentle ways. I loved her bit of a New England accent. We remained friends and always shared a laugh when running into each other. My condolences to all family. She will be deeply missed by all.

Laurene and family, Thank you for sharing your Mother’s life in such a beautifully written remembrance. She was so kind to our Mom when they were both in Lakeview. Even though she couldn’t see well and our Mom couldn’t hear or speak well, she found a way to make our Mom feel like she had a true friend through her patience and kindness. Our family is forever grateful for that. Many Blessings to all of you. Kathy Bladow

So sorry to hear about the loss of your mother!

So sorry to have just learned of this! You are all in my prayers. Loved Laura!
Michelle Ottensman

So sorry for your loss. She was a special person. In Gods hands now with no more suffering.