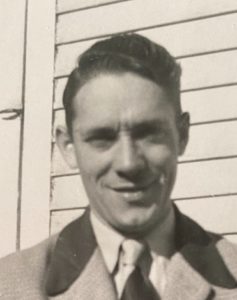 Karl Norman Kell, age 94, of Escanaba passed away on November 7, 2020 at the UP Health System in Marquette due to complications from Covid 19.

Karl was born June 29, 1926 in Escanaba, the son of Ivan and Beatrice (Ehlers) Kell. He grew up on the Kell family farm in Wilson and attended school in Powers. He was united in marriage to Jean Charland on April 17, 1948 at the St. Stephen’s Episcopal Church and together the couple made their home and began their family in Escanaba. He was a member of Christ the King Lutheran Church in Escanaba and a lifetime member of the Iron Worker’s Union.

Karl entered the apprentice program for carpenters and worked for Al Brandt, Erling Arntzen and Pascoe Construction. He also worked as an iron worker with Roy Ness Contracting for the last 25 years of his career, serving as a foreman and superintendent. In his early years, Karl worked on construction of the Delta County Chamber of Commerce, Delta County Courthouse and Jail, State Office Building, Manistique School and numerous other local buildings. While employed with Roy Ness, he changed the face of the Upper Peninsula, working on building the Bessemer Plywood Factory, the Houghton County Airport Building, the Algoma Steel buildings in Sault Ste. Marie, buildings at Marinette Marine, Lakeview Arena in Marquette and numerous other locations.

He enjoyed spending time at camp, driving his tractor and farming, hunting, fishing, being in the outdoors, watching the news and keeping up with current events.

He was preceded in death by his wife, Jean, his parents and brother, James Kell.

Private services will be held at the convenience of the family. Karl will be laid to rest in the Gardens of Rest Cemetery in Wells.

Our thoughts and prayers go out to the family. we have lots of fond memories spending time with “grandpa George” at camp. He always treated us like part of his family. He sure will be missed by all who knew him. He always looked so forward to hunting season & getting his big buck.

Love and prayers Todd to you and the Kell family.
My he rest in the arms of the Lord.

To the entire Kell Family,
I have many fond memories of Karl. He was a key player in the growth of Roy Ness Contracting and I had the pleasure of working along side of him on several projects as I worked my way through school. Randy, I’m sure you remember the roofing crew on the plywood factory in Ironwood. Karl had you all trained up on the stapling technique so you had a head start on the rest of us greenhorns! I got the worst sunburn of my life on that job and the back of my neck blistered but we all kept going with pride when we could meet or exceed the goal Karl set for us every day. As the “kids” on the crew we never got to ride up front in the cab of the pickup truck…nope, they made us ride in the back, no seat belt and not even a seat but we survived. Karl was one of the best foremen that my Dad ever had. He was always prepared, always loaded with tools and ready to go, and always got to the job early and left for home late. He never cut corners and worked hard every minute of the day. He was also very proud of his family and talked about each of you often. I always knew what Ricky and Randy were up to when I talked to Karl and his girls were also in the conversation. It’s November now and we all know what that meant to Karl…..hunting season. Although I don’t have that same passion, I’m sure you all have many fond memories of deer hunting and camp life. I hope this season is successful for you and when you reflect on the memories you have with Karl, I hope you know how blessed you were to have such a good man and great example for a father. He was certainly a fine example for all of us. I hold all of you in my thoughts and prayers during this difficult time.

Our deepest sympathy to Cindy and Todd and all the family. We never had the pleasure of meeting your dad but from all we’ve heard of and read about him he sounds like he was quite an amazing guy and certainly a hard worker. He had been fighting a long hard fight to hang on to his life here for quite some time now and now the Lord has called him to be in His arms and continue his work in heaven praying for all of us still here. Lifting you all up in our prayers for peace and strength. God bless. Love Steve & Sue Javurek

Thoughts and prayers to the kell family. We have all enjoyed our visits with your dad and Mal the past few years. They were a good twosome!! He always made us smile. You all have been a fortunate family to have had him for so many years

Dear Randy and family
I’m so sorry for your loss! Carl was a one in a million guy. An easy-going , honest, hard working, very conscientious person with a good heart and usually a smile on his face. All the years we worked together l can’t remember ever having cross words between us. He was usually at the job or the shop waiting when I arrived and I always thought that I should be there early as a good example. He was a great guy to work for. I’m sure you will miss him greatly. God Bless you and your family in this time of morning. Faye and I have you in our thoughts and prayers.

Our thoughts and Prayers to Maureen and our extended family in this time of loss.

Dear Maureen, Randy and Sandy, Rick and Cindy and family, Sorry to hear of losing your Dad. I sure haven’t seen him in a long time or you for a long time. Growing up across the alley from your family I do remember what a kind man and great father he was, sure haven’t forgot that. My thoughts and prayers are with your family in this most difficult time.

I am so sorry to hear Mr. Kell passed away. I know he will be deeply missed. While attending college, I spent a lot of time at the Kell home. In my 73 years, I never met a more loving, compassionate family. Karl and his wife Jeane raised a wonderful family. My thoughts and prayers are with the family.