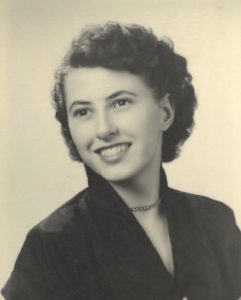 After graduation Betty worked as a nurse’s aid at Saint Francis hospital. She married her high school sweetheart and neighbor Ralph LaFave Sr. on May 17th 1952 at Saint Ann’s chapel located in the Saint Anne’s parochial school. They had celebrated 55 years together before Ralph passed away on Dec. 3, 2007.

Betty & Ralph lived in Escanaba where their 8 children were born until Feb. 29, 1964 when they purchased a home on Wisconsin Avenue in Gladstone where they owned their business, Shaw Dry Cleaners. They lived in their “big corner house” until Dec. 1999 when they moved to the Lake Bluff Retirement Village on the Gladstone bluff. Betty remained in their home until Dec. 2019 when she moved to Sunny View AFC Home.

Betty was a very active member of All Saints Catholic Church in Gladstone. In 1973 when the All
Saints School closed, she was one of the 1st volunteers to be trained to teach CCD classes and did so for 28 yrs. until 2001. She served as Eucharistic Minister from 1987 – 2013 and on the Parish Council Executive Board as the Chairperson of the Social Life Commission for 3 yrs. from 2001 – 2004 and volunteered at many church functions throughout the years retiring from most in 2010. Betty was very active in the Parish Bible Study Group and was a member of the Saturday Morning Blue Army Rosary Group and The Charismatic Hearts of Praise Group. These groups and their members held a special place in her heart as did her love of scripture. She could never get enough of it. While serving on the Parish Bible Study Board, she came across a favorite quote “When you romance the Word you fall in love with God and come to know Jesus intimately in your heart.” How true that was in her personal life as she gave many bibles as gifts to others and always included a special Bible verse in the many cards and notes she sent. She was a gifted letter writer and enjoyed composing special notes & poems.

Betty worked as a waitress at the Stardust Lounge in Escanaba in the late 1950’s. She worked at the Harnischfeger factory in Escanaba during the late 1960’s and early 1970’s as an insulation cutter. She didn’t mind the work but wasn’t happy being away from her children. In 1973, after much prayer, she opened an Adult Foster Care Home within her home. Betty cared for a total of 51 elderly people in the 22 yrs. her AFC Home was open. She gave God the credit for giving her a vocation she enjoyed and enabled her to be home to raise her children. In December 2002, through the Community Action Agency, she volunteered as a Senior Companion. She was very dedicated to her clients who became her friends. After nearly 8 yrs., she retired in March 2009.

Betty bowled in the Women’s National League in Gladstone and the Summer Night League in Escanaba. She took a class to learn to play bridge and enjoyed going to & hosting many bridge game nights. Betty enjoyed cooking and trying new recipes and in her earlier days she loved to entertain and have luncheon and dinner parties. Her home was usually the gathering place for many different holidays and special occasions in life. Late in life through the enthusiasm of her daughter-in-law Angel she got involved watching the Green Bay Packers. Her favorite player was Brett Farve with whom she shared a birthdate. She was also a big fan of Notre Dame football.

Her sister-in-law Dorothy St.Jacques of Susanville, CA and in-laws Robert (Linda) LaFave of Escanaba. Betty is also survived by many dear nieces and nephews.

Betty’s final wish was to leave this spiritual food for thought which was one of her many favorites: ” If you fed your body as often as you feed your soul, how hungry would you be? Do you have spiritual anorexia?”

“But God demonstrates His own love toward us, in that while we were yet sinners, Christ died for us.” Romans 5:8 NAS
“For whatever is born of God overcomes the world; and that is the victory that has overcome the world – our Faith. And who is the one who overcomes the world, but he who believes that Jesus is the Son of God.” 1 John 5:4 – 5 NAS

Betty’s family would like to give special thanks to the caring staff of Sunny View AFC Home, Julie, Tricia, Gail and Debbie. OSF Hospice’s entire staff, especially Rachel RN, was also wonderful in caring for Betty and their commitment to serving all aspects of their patients and their families’ needs during these difficult times is commendable.

Family will receive friends on Thurs. June 17, 2021 at the Skradski Funeral Home in Gladstone, MI with visitation from 3:30 – 5:30. A Mass of Christian Burial honoring Betty will follow visitation at 6:00 PM at All Saints Catholic Church with Rev. Fr. Rob Jurkovich officiating. A luncheon will follow at Lake Bluff Retirement Village Community Center, 401 Kenneally Blvd., Gladstone, MI. Elizabeth will be laid to rest in the Fernwood Cemetery on Friday June 18, 2021.

You will be missed by many Aunt B; during your time here on Earth you have touched the lives of many. I love you forever and you will always live on in the memories I have of you. Tell Dad, Millie and Uncle Ralph hi. Give them all a big hug from me.

To my mom: ( and I have told this to her many times) you are one of the strongest women I know. You didn’t let things get in your way. Thank you for showing me independence and how to take care of myself. You have overcome many obstacles in your life but have always trusted the Lord and told us he will provide and you are right. You have made many sacrifices and have always put your children first and kept the Lord in our lives. You’ve been a great example of what a mother should be. We have lost our prayer warrior for the family, you will be missed greatly by all of us! Hugs and kisses to you and all my loved ones up there. I Love you mom (and she would say, “I love you more”)

We have had Betty on our church prayer corner. Sending our sympathy to Debbie and Keith and the entire LaFave family.

Betty will be missed! Pat and I would like to thank you for being such a good friend to Lois all these years! Prayers for all that knew and loved her, Rest In Peace, dear Betty.

Betty was one of the most loving, excepting souls. We have many happy memories of our time with her that will live on in our hearts until we meet again. She opened her heart and home to us and made us feel welcomed.

Having lost my own mom 11 years ago, I know time heals and makes way for smiles. Thoughts of her will come at times when you least expect, but these thoughts will turn from sadness to happiness, trust me. I have no doubt that she is in Heaven with all her family that she had spent so many years part from; that she always spoke of with just love.

You all have our depth sympathy,

Our deepest sympathy to the whole entire family. She was an awesome, and very special lady and will be missed by everyone who knew her. Hugs to you all!

I had the pleasure of calling her grandma, though she was not my grandma. It’s hard living with regret. Regret that I didn’t say goodbye and thank you. Betty was truly salt of the earth, and so was her late husband who I admired as well.

I remember visiting her every now and then, as well seeing her at family functions. She always made me feel at ease. Anxiety, my constant companion, faded in her company.

I didn’t know what a family was… She exemplified her love for her family.

Betty, thank you for your smile, your graciousness, and hospitality you poured out to all those who had the pleasure of knowing you.

The memories we have of you will always give comfort and be a blessing.

Debbie – Tom and I send our deepest sympathies to you and your whole family. Betty was always a smiling ray of sunshine. We hope that as you grieve her loss you will keep fond memories of her close to your hearts. May she rest in the peace of Christ forever.

So sorry to hear of Betty’s passing. She always had a smile on her face, and just seemed so happy to be alive. Miss seeing her at church, as I am sure many people are. I know she will rest in peace…