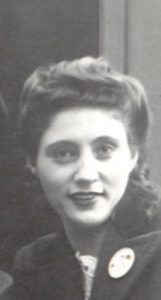 She was born July 16, 1923 in the Buckeye Addition in Gladstone. She was one of ten children to Martin and Madeline (Steffic) Young, Croatian immigrants, who ran a milk farm in West Gladstone most of their life.

Ann attended Carol’s Corner school in Gladstone, then helped out on the family farm milking cows and growing and preserving vegetables until about age 18. She moved to Chicago to live with her sister, Mary for a few years, while her fiancé, Ray Duchaine, also of Gladstone, served in the U.S. Army during WWII. While in Chicago she worked on the assembly line for Hallicrafters, making radios for the war effort. In 1944, she returned to the area and married Ray, where they lived for a time in the Groos area, then built one of the first homes in the Pine Haven Subdivision, where she was a homemaker the rest of her life.

Ann was a volunteer for the American Legion Auxiliary for years, as a flag holder at many funerals and celebrations and helped at Legion events. In her healthy years, she looked forward to monthly lunches with her girlfriends and visits from family and neighbors. But mostly, she loved spending time outdoors at the family camp. She was a hard worker and pitched in raking, weed eating, burning leaves, growing gardens and cutting firewood well into her 80’s. She loved recounting stories of hard farm life. She drove her car and did all her own house work into her early 90’s. She enjoyed taking rides to reminisce and this past summer was her last ride on a side-by-side at camp, and a Model T ride from longtime friend and neighbor, Mike Pryal.

Ann is survived by her one son, Michael (Connie) of Escanaba, grandson, Jeffrey Duchaine of Escanaba, step-grandsons, Matthew Laraby of Escanaba and Joshua Laraby of Fairfield, Iowa, brother, Joe Young of Gladstone, sister, Rose Byrnes of Two Rivers, Wisconsin and many nieces and nephews.

In addition to her husband, who died in 1988, Ann was preceded in death by her sisters, Ilene, Mary, Elsie and Pauline and brothers, Chuck, Martin Jr. and Steve Young.

She gave her life to the Lord in the last week of her life.

A celebration of her life will be held at a later date, where there will be many stories to share. She will be laid to rest in the Gardens of Rest Cemetery in Wells.

The Duchaine family is being assisted by the Skradski Funeral Home in Gladstone.

We were sad to hear that aunt Tiny passed away. She was such a character and always made people laugh. We are so sorry for your loss.

My Aunt was a wonderful kind lady, I will miss all her all of her great stories! Aunt Tiny had such a sense of humor always making us laugh. My husband just said she could hold her own in any situation, Mike and Connie made sure her last wishes were granted! May she rest in peace! sending Love and Prayers, Love Dena

We sure treasure all our times spent “chatting” with Tiny in our yards next to each other in Pine Haven Subdivision. She was always interested in what was going on in our family too, sweet neighbor/friend she was!! We extend our deepest sympathies to Mike and all family too! She is now at rest in our Lord’s house and happy!

I am so sorry to learn of “Mrs. Duchaine”‘s passing in todays newspaper. As a young child I would regularly cut through her backyard enroute to my friends house on the other side of the neighborhood. A young Tracy Bero and I would bang on her patio door in search of the Circus Peanuts she would regularly hand out to us. She was always a very funny and sweet lady and will always remain in the forefront of my childhood memories in Pine Haven. My deepest condolences to the entire Duchaine family!

Greetings Michael from your former next door childhood neighbor, Cathy Groos. I remember your mom fondly. She was always there with a smile and kind words. After you moved we lost track of you, but I will always remember your Mom and you. Fond memories of you getting your first 2 wheeler and letting me ride it. Please know I will keep you and your family in my Easter prayers.
May peace be with you!

Our sincere sympathy to Michael, Jeff and families during this difficult time. How comforting and reassuring to know that our loving GOD was an integral part of her end days. May HIS peace be with all of you!

Our deepest sympathy to Mike and your family on the loss of your mom. She was a very kind hearted woman and special to us. Her smiling face, her friendly wave, and her afternoon chat sessions will truly be missed. Please accept our deepest condolences.