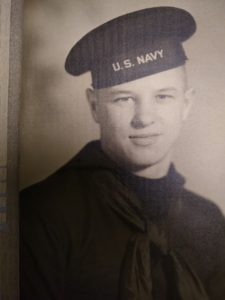 Robert Clarence Sturdy, age 93, passed away of natural causes early Thursday, December 31, 2020, at his home surrounded by his loving family.

Robert was born March 21, 1927, in Escanaba, the son of Clarence and Ella (Coulliard) Sturdy. He was raised in the rural Gladstone area and attended Escanaba schools.

Following school. Robert enlisted in the United States Navy where he served during WWII until his honorable discharge.

On January 20, 1951, Robert was united in marriage to the former Rita Desjarden and together the couple made their home and raised their family in Gladstone (Gross). In addition to raising their family, Robert and Rita worked together on their family mink ranch for many years.

Graveside services for Robert will be held on June 1, 2021 at the Fernwood Cemetery in Gladstone. The Skradski Family Funeral Homes of Delta County are assisting with arrangements.

Rita, you and your family are in our thoughts and prayers. Hope to see you soon.

Our condolences to Rita and her family. We knew Rob through our years at the Gladstone Golf Club. He was always such a happy, go lucky man.

Rita and family,
So sorry to hear of Robs passing. He was such a happy going guy. So glad we got to see him when clearing out your rutabaga patch. Take care. Gene and I know he will be missed and loved into eternity. Your beautiful grandkids will have only great memories. Prayers for you all. Donna and Gene

Condolences to Rita an family. Was fun working with Bob on the mink ranch in the sixetys an seventys.

Our sincere condolences to the whole Sturdy family. Although we didn’t really know “Grandpa Sturdy”, Erin always had many stories to tell about him! She always spoke of him fondly and will certainly miss him. Praying that your memories help ease your sadness, a bit.

So sorry to hear of Robert’s passing. He was always a happy guy and had some funny stories to tell on our walks. My deepest sympathy to you Rita and your entire family.

So sorry to hear about Rob. Sending condolences and prayers to you Rita, Gail, Allen, Dale, Rodney, Robin, and all the family.
Many good memories of hanging out at your house.

Gail, sorry to hear about your dad passing away. It is never easy losing a parent; thank God for memories. Hope to see you when this covid thing has cleared up. Your classmates miss you dearly.

Allen, sorry to hear of your dad’s passing. Sending you hugs and me deepest sympathy. Nancy Crawford Bozenda

Reta and family
We remember you and Rob with fondest memories. We send our condolences to you and all of your children and nieces and nephews.
Jim and Lois Boydston

I met Bob when He was kind enough to assist Allen Desjardin shape some of the more undulating greens at Garden Golf Course.
He was very kind to do so , what a sweet man.
My Condolences to the family.
John Lucas

May he rest in peace now . Thoughts and prayers to you all.