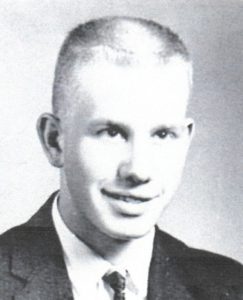 Michael was born July 18, 1943, in Port Townsend, Washington, the son of Floyd and Helga “Betty” (Johnson) Logue. Mike graduated high school in Port Townsend in the class of ‘61. He then joined the United States Air Force and served for 21 years. He also was a Vietnam War Veteran, and served as a refrigeration specialist. He retired from the Air Force in 1981 when he acquired his own business, Mike’s Refrigeration, until the 1990’s.

Although he was from Washington, he adored his Michigan life also. Mike was a 32nd Degree Mason, an avid sportsman, enjoyed camping, and flying his plane. He also enjoyed snowmobiling, cross country skiing, and motorcycling. Mike was reunited with his highschool sweetheart, Mary “Molly” Logue, in 2017 and together they shared many wonderful memories.

Family will receive friends on Tuesday, April 13, 2021, from 11:00 AM to 1:00 PM at the Skradski Funeral Home in Gladstone. Military Rites will be held following visiting at 1:00 PM officiated by the Gladstone American Legion.

Mike and i have been friends for over 45 years, some one who will be missed by all.

Mike was a great guy and an excellent saxophonist. I played with him in the Negaunee City Band for a number of years. I particularly remember his solo on Strawflowers. I believe he brought in the first refrigerator at the old band shell.
Despite his various physical problems he never complained and just soldiered on. Pleased that he was able to retire to camp with Molly and the pups.